Today, data to be treated in scientific computation is becoming larger and processed data after computation and simulation is also increasing. For the reason, intuitive visualization of such large amount of data is of much importance. However, despte the improvement of network technology, it is still hard and almost impossible to move Tera Byte -scale data among research institutes. From the background described, this study focuses on remote visualizataion technology that visualizes only data necessary and then delivers the visualized data, rather than moving data for visualization. In this study, we aim to develop a method and technology for efficiently controlling network flows for remote visualization so that users can get better user experience. Specifically, development of a method for detecting and avoiding network failure for sustaining remote visualization, and improvement of visualization quality by controlling network flows in responce to user’s interaction has been researched.

This reearch has been promoted with NICT researchers and partly supported by the collaborative
research of the National Institute of Information and Communication Technology and Osaka University (Research on high functional network platform technology for large-scale distributed computing).

We are demonstrating the product in this research in exhibit opportunites such as SC conference/exhibition. In the demonstration, we make efforts to enhance the practicality and usefulness of our research product by conducting evaluation experiments in such opportunities. 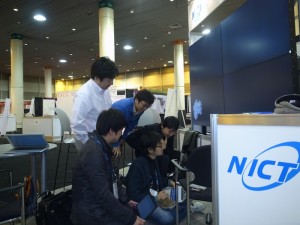 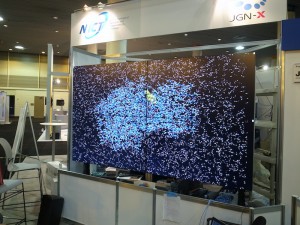